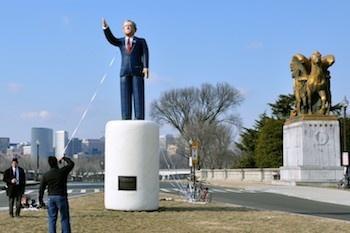 Artist Broc Blegen is a staunch George W. Bush supporter. So much so that he wanted to pay homage to the president immediately rather than waiting the typical months or years it normally takes for traditional statues to be created.

Employing his creative nature, he devised a collaborative effort with Landmark Creations to make his vision a reality.

"I wanted citizens to reflect on President Bush's legacy right away, in the moment," recalls Broc. "This is why I contacted Landmark Creations.  I needed to make a perfect inflatable effigy of President Bush on a very tight timeline and budget, and they delivered!"

This detailed, outdoor inflatable bears a striking resemblance to President Bush, memorializing him in his classic dark-color suit with white shirt.  Positioned atop a built-in podium, a plaque was affixed with a brief descriptive plaque.

First unveiled on President Obama's Inauguration Day (January 20, 2009), the cold-air inflatable monument was positioned directly across from the Lincoln Memorial and within eyesight of the Washington Monument.  Its second appearance came on Presidents Day 2009 and this outdoor inflatable statue has most recently been seen in public the day after Osama bin Laden's assassination.

Broc explains, "[The inflatable] basically jump-started my entire art career. It put me on the map and it is still the main project that I use to describe my work."

We just never cease to be amazed at the creative uses our clients come up with for cold-air inflatables.