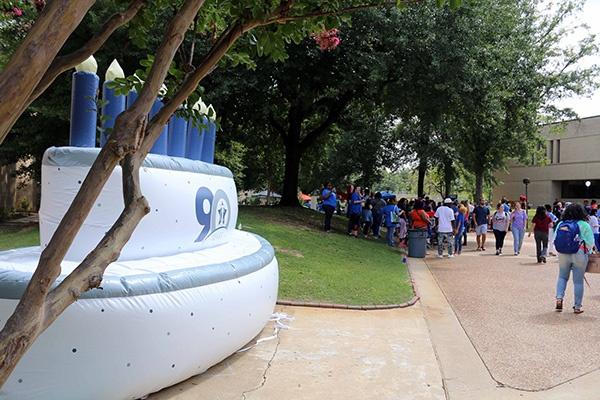 How do you celebrate the 90th anniversary of a beloved Northeast Texas institution? With a giant inflatable birthday cake, of course.

That's why Texarkana College asked Landmark Creations to custom-build a huge "confection" in the school's familiar colors. According to Suzy Irwin, Director of Public Relations and Institutional Advancement, "We wanted a student-friendly display that could remain on campus during the year."

At the same time, she says, the two-year community college wished to raise local awareness of its rich, longstanding relationship with the broader community.

Says Irwin: "We unveiled the inflatable during our 90th Anniversary [kickoff] event, with over 1,000 people in attendance." Since then, the giant inflatable has served as an eye-catching parade float. According to Irwin, "It is easy to assemble and deflate when you want to transport it to a new location."

So far, says Irwin, the inflatable cake has proved immensely popular. "College students, faculty, staff, and children of all ages love it," she says. "We have seen families stop their car and get out to take a photo with the cake."

Why did Texarkana College choose Landmark to create its giant inflatable? Irwin reports, "The staff was very easy to communicate when it came to our custom design." And the end result, she says, was worth it: "Great concept for what we needed to accomplish for our college!"