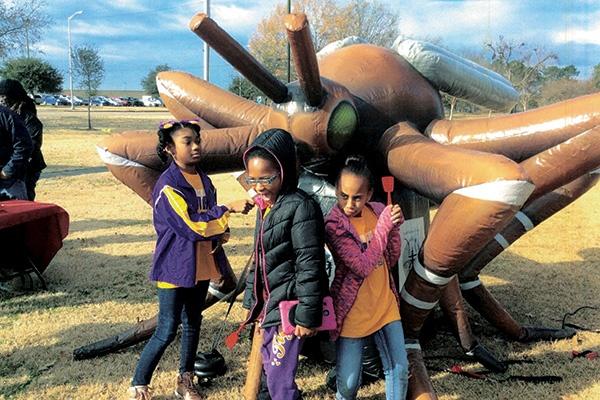 How do you remind people that they play a crucial role in residential mosquito control? Show them a giant inflatable mosquito mascot, of course!
That's precisely what the folks at East Baton Rouge Mosquito Control are doing. The southern Louisiana agency is dedicated to safely controlling the area's mosquito population.

As part of this effort, they put on educational displays at local health fairs, school programs, and LSU Agriculture Department events. And they're always accompanied by Misty, a massive inflatable mosquito standing 6 feet high, 10.5 feet wide, and 9.33 feet long.

Designed and built by Landmark Creations, Misty is authentic in every detail, right down to her beady green eyes and impressive proboscis. And, according to Community Outreach Coordinator Kenny Ricard, she certainly makes an impact. Children and adults alike flock to the East Baton Rouge Mosquito Control information booth to view the realistic inflatable mascot. Ricard notes that foot traffic has improved considerably... and this, in turn, helps the agency get the word out about vital pest-control measures.
Why did Ricard choose Landmark to create the custom inflatable? "Landmark was highly recommended by another mosquito control district in Saginaw, Michigan," he reports. And the result has certainly paid off, as more and more local residents learn how they can help reduce the skeeter population