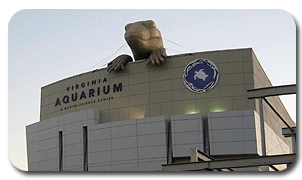 He's not cute and cuddly, but he's definitely a traffic-stopper. Drivers on their daily commutes got a wake-up call when they noticed something a bit strange atop the Virginia Aquarium & Marine Science Center.

From the looks of it, a giant Komodo dragon was peering over the top of the building down on the world below. Of course, it wasn't a real dragon… just a very lifelike inflatable character.

Why place a dragon head on the roof of your building? "We wanted to increase the awareness in our community that the 3 years of renovations to the Virginia Aquarium & Marine Science Center were completed.  With the renovations came the addition of a multitude of new exhibits and species to our facility, and the stars were the Komodo dragons," relays Mandy Lui, Production Coordinator for Brand Communications Firm (BCF), representatives for the museum.

As you might imagine, this inflatable advertising balloon did its job with piquing curiosity about the museum's new Restless Planet exhibit. Thanks to this big guy, BCF can report that the museum experienced a "drastic increase in interest and inquiries about what's going on at the facility." It's all in a day's work for our giant reptile friend!