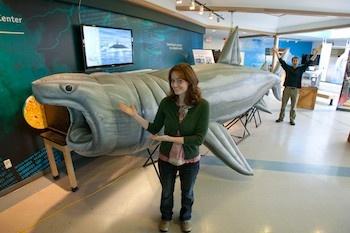 Thanks to the sister-and-brother team of Laura and Rob Sams, Sisbro Studios has given sharks their own ambassador.  Devoted to teaching kids about nature, Sisbro Studios has produced films and created educational events that have appeared nationwide.

In conjunction with their most recent Shark Days film, they commissioned a life-size shark replica from Landmark Creations.

This 23-foot-long basking shark gives students and adults the feeling of what it's like to stand beside one of these massive animals.  But have no fear!  Even if this shark were not inflatable, there would be no danger.  Basking sharks are completely harmless to humans with mouths designed exclusively to eat plankton.

"[The inflatable life-size shark replica] is portable enough to be shown anywhere from schools and libraries to larger museums, zoos and aquariums," states Sisbro-owner Rob Sams.

"While promoting an educational tour, credibility is key to opening the door of some major educational institutions (ex. the Monterey Bay Aquarium). This inflatable basking shark has helped put an exclamation point on my credibility as a science educator and presenter.  I have used this inflatable shark in pitch meetings with various large aquariums, and they are always impressed by the awe-factor of this [life-size shark replica]."

Experience, competitive pricing, attention to detail and turnaround time were just a few of the things that led Rob to Landmark. Our willingness to make mid-project adjustments in order to get the shark just right cemented the relationship.

It is always fun to bring something that kids might not otherwise get to see to life right before their eyes.