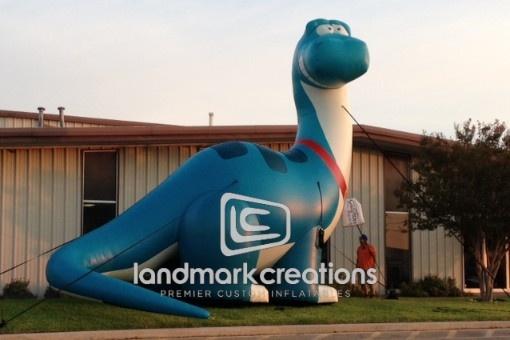 When someone says "bedrock" and "dinosaurs" your first thought is probably Fred Flintstone. But Fred never had a house like this! Clayton Homes General Manager, Don McCann, explains that they chose the dinosaur because of the name of their new line of manufactured homes: Bedrock.

"These are unique in our market as they feature granite countertops."

Unlike his slow, prehistoric counterpart, the Clayton dino really gets around! If he follows the same path as their first inflatable mascot (a caveman named Lou), the dino will travel a five-state route.

This custom inflatable is up to the task because it packs, unpacks, inflates and deflates quickly and easily. That's just the ticket for Clayton because they are constantly advertising their weekend promotions at various locations.

Don is quick to point out, "Our goal is to create brand awareness with our facility and our products through our dealer base by offering them free use of our inflatable for their promotional events. Each of our dealers has increased traffic flow at their sales centers with the use of Lou and Dino. We have a long waiting list for each inflatable (about six months for each of them)!"

I think that type of success speaks for itself.

Get an Estimate for Your Project