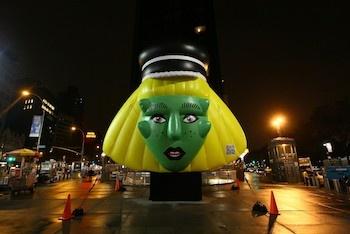 Uptown Manhattan was taken over by a herd of inflatable character balloons in November as Barneys New York launched a new holiday campaign.

In conjunction with pop diva Lady Gaga, the upscale retailer has transformed the entire fifth floor of its Madison Avenue store into a delightfully demented shopper's paradise.

Making use of three different inflatable characters, Barneys New York was able to all but monopolize the media (at least temporarily).  The quirky displays outside the store and around the city certainly bolstered the curiosity levels of people on the street, causing them to stop and have a good, long look.

Cold-air inflatables were used at three street events.  A "Gaga Claw" went up at Houston and Broadway while a massive "Gaga Head" inflatable character took center stage at Columbus Circle surrounded by a troupe of dancers.  In addition, the "Gaga Spider" was collecting second glances on the corner of 23rd at Broadway.

With a limited selection of Gaga products to choose from, the project hopes to raise awareness and funds for the Born This Way Foundation.  Barneys New York is donating 25% of all sales from the Workshop to the cause, which addresses issues such as bullying.

If ever we've had an exercise in stretching the boundaries of creativity, this would be it!  Just goes to show how flexible, fun and functional cold air inflatables can be.