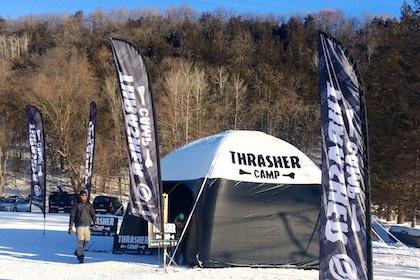 When Vision Elite Sports and Thrasher Camp President, Paul Miller opted to purchase an inflatable dome, it was originally to serve as a basecamp for events. However, Paul quickly discovered that these multifunctional tents pull double (and even triple) duty.

“Along with providing a place for riders and staff to congregate throughout the events, the inflatable dome also gave us a marketing tool that is unrivaled to any other in our industry.”

Even having the benefits of exceptional visibility and a place to rally around, their tent also offered an unexpected surprise. “At the 2014 USASA Snowboard National, we had our dome set up for a week. After eight inches of new snow fell overnight, we all were worried to see what the dome looked like. To our great relief, it was upright and the new snow seemed to have no effect on the tent whatsoever.”

That’s quality for ya! But wait! There’s more.

Thrasher Camp had a goal of obtaining national recognition for their youth snowboarder camps. Thanks, in part, to their use of Landmark Creations’ inflatables, they have seen increased rider participation for camps all across the country.