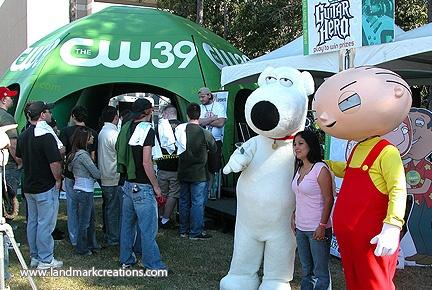 KHCW-TV wanted something non-traditional that would increase their visibility at the many events they attend each year. After visiting Landmark Creations' website, they were impressed with what they saw and decided a custom inflatable tent would work well for their purposes. They haven't been disappointed!

Not solely for one specific project, KHCW-TV has truly given their inflatable tent a workout. As creative advertising ideas came to mind, the station would arrange to participate in various shows and appearances.

Station officials boast, "The [inflatable] tent has definitely increased our visibility at events. It generates lots of traffic and curiosity. Everyone seems to want to visit the tent to see what’s going on in there. The size and unusual shape of the tent makes us something of an anchor or a destination at events, and often dwarfs others booths and displays. Used in combination with show signage and cardboard character cutouts, the [inflatable] tent looks like a fun and inviting place to be. Also, having our own tent often simplifies our setup because we are not dependent on event-specific displays. We always have our consistent space that we utilize in our predetermined way."