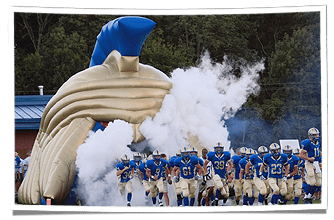 When talking with Mike Maddux, Sports Marketing Coordinator, you can clearly see that these (and other) goals were accomplished using their new football tunnel. Mike really tells it best, so I'll step aside and let him explain.

"We didn't want just another generic football helmet inflatable. We wanted a unique design that was larger and more detailed than any of the other schools we had seen with inflatable [tunnels]. When I saw the design I was very excited, and when I saw the curtain with the glaring eyes, that just set it apart. The [football tunnel] is large enough that our team huddles inside of it, does a very cool pre-game chant, and then bursts out of the curtain with smoke billowing every where. It's really cool and we had so many comments about it from not only our fans, but the opposing team as well. Our football team was 11-2 on the season, but we were UNDEFEATED in the inflatable tunnel wars during pre-game warm ups. Ha!"

Couldn't have said it better myself.

“Everywhere it goes, folks go out of their way to catch a glimpse of the colorful inflatable.”