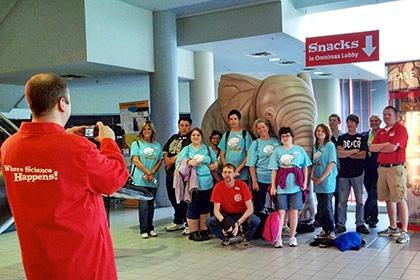 Did you know elephant trunks inspired the creation of certain manufacturing robots because of their range of motion? Or that wind turbines are becoming more efficient at harnessing air, thanks to the bumpy shape of humpback whales?

You're not the only one who's amazed. School children across the country are finding out these incredible facts and more, thanks to a 45-minute theatric assembly put on by a Carnegie Science Center educator.

Demonstrations, audience participation, videos and - of course - giant, inflatable wildlife replicas come together to create an experience that's entertaining, fascinating and educational at the same time.

The goal? To introduce kids to the unique connection between nature and science.

With the help of an eight-foot-tall inflatable elephant named Zuri and a 16-foot-tall inflatable humpback whale named Gracie, "Wild by Design: An Innovation from A to Zoo" enlightens kids about the wonders of this world and how they can inspire new innovations in biometrics and other fields.

Carnegie Science Center chose Landmark Creations due to our ability to produce scientific realism and props that could withstand travel from school to school on a daily basis. After a couple of sneak peeks, the folks at Carnegie are certain they'll get an abundance of photo ops and press coverage in the near future.

"We received our inflatable and gave it a test run Saturday afternoon. To be short; Excellent Work. Thanks again for all your efforts."