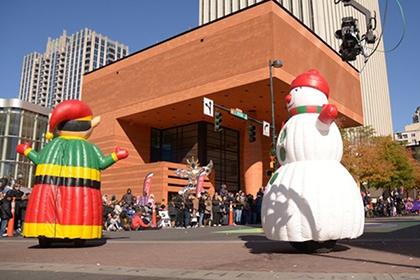 What do you get when you cross a cold-air inflatable balloon with a Segway? A Segwaloon! The concept and the name were created by Robert Krumbine, Executive Producer of the Charlotte Center City Partners, for the Novant Health Thanksgiving Day Parade.

By outfitting a manned Segway with an inflatable balloon “sleeve,” the driver can maneuver the scooter anywhere including up and down parade routes, throughout festivals and everywhere else a Segway can go.

“The idea was to creative a unique and more interactive version of the large balloons that many parades include. We have a fantastic group of Segway tour guides in Charlotte, so we designed and worked with Landmark to produce balloons that could actually fit over the Segways. The Segwaloons were able to engage with parade attendees in ways that no audience had seen before,” explained Lelia King, Chief Creative Officer.

You know, we just “get” stuff like this! If you have an ingenious idea you’d like help producing, give us a shout. We’re always up for a creative challenge.