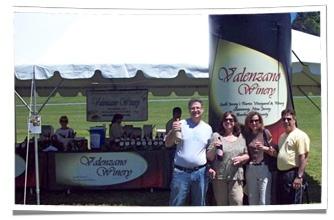 Fairs, conventions, trade shows… events such as these have many things in common, but one stands far and above the rest. They draw huge crowds. That means, in order to achieve success, you have to get noticed. Easier said than done with thousands of people milling about.

Since the golden rule of event marketing is to attract attention, you have to think outside the box (or booth). Here are 3 ways you can stand out from the crowd and ensure higher traffic levels for your exhibit.

The trick to thinking outside the event marketing box is to observe what others are doing, then do the opposite. For example, since most booths or exhibits will be no more than 10 feet high, take yours to the ceiling. That's what Topcon did at the Las Vegas ConExpo Show. They used an inflatable, lighted globe anchored to the ceiling above their floor display. Talk about attention-getting! It could be seen by every person as soon as they entered the hall.

Valenzano Winery made a splash at an outdoor wine competition. All participants used standard, white tents, but Valenzano placed a 15-foot-tall, inflatable wine bottle at their entrance. Because it stood higher than the tents, it was the first thing most people saw as they entered the festival grounds. They actually had a line of people waiting to take their picture with the giant, inflatable wine bottle.

If you can hit an emotional chord with event visitors, you'll hold their attention and stay in their memory longer. This is an approach the Environmental Protection Agency's Office of Water took during Water Week. They commissioned an inflatable mascot, Thirstin', especially for the event.  Bigger than life, colorful and cute; Thirstin' brought fun to the event and had crowds of people gathered round.

In the same fashion, Kinetik brought a giant gargoyle to their trade shows. Now that's an attention getter! The shock of seeing this green monster stopped passers by in their tracks. His whimsical charm kept them at the booth allowing representatives the perfect opportunity to strike up a conversation with visitors. Pretty smart strategy!

Add a game!  Everybody loves to try their hand (or foot!) at baseball and soccer. Inflatable games give you the freedom of easy set up and tear down and also offers an exceptional draw. People will line up to play which means they are exposed to your message longer.

Entertaining can also be educational. Just ask Nature's Sunshine. They employed an 80-foot-long inflatable colon at their national convention. Walking through the display, visitors learned about colon disease and how to prevent it and got information about Nature's Sunshine products.

Finding ways to capture the interest of event attendees is absolutely key. With so many "ordinary" displays at events, a little creativity will be the secret sauce in your event marketing recipe. It will also be what wins you more traffic to your booth and more leads for your sales reps.