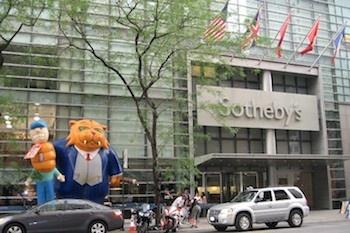 When you represent and protect the rights of millions of workers across the United States, public events such as press conferences and protests become part of the job. The Teamsters Union understands that making an emotional connection is something a giant inflatable does best. That's one reason they chose to enlist the help of a huge, 15-foot balloon.

The Teamsters' Fat Cat makes a strong visual statement in his suit and tie, supports the cause of protesters and piques the curiosity of passersby.

"We find that using the [giant] inflatable Fat Cat helps us achieve greater public awareness and greater press coverage," reports Campaign Communications Manager Elissa Laitin. "We plan to use the Fat Cat at many upcoming protests."

Because custom outdoor inflatable balloons give reporters something to photograph they work much better than ordinary signage.  Regardless of what you're planning - from sporting event sponsorships to cause marketing - a giant inflatable is a crowd magnet that can't be ignored.