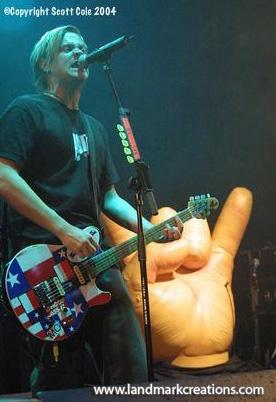 Bowling for Soup's Inflatable Hook ‘em Horns - No, it's not charity… it's a punk rock band!

Bowling for Soup used these happenin' hands as stage props during their European tour. Inflatable, easily portable and definitely eye-catching, these hands performed almost as well as the band did.

And our congratulations to Bowling for Soup for winning a Grammy award against such stiff competition like Bon Jovi and 'N Sync.

Bowling For Soup - No, it's not déjà vu. We have mentioned Bowling for Soup before, but they are worth mentioning again. Why?

We just wanted to show off the cool pictures taken during their tour.

"We received our inflatable and gave it a test run Saturday afternoon. To be short; Excellent Work. Thanks again for all your efforts."