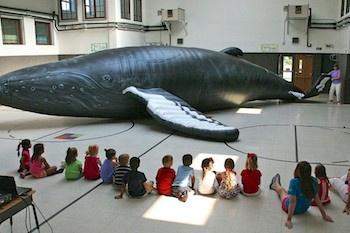 Kids love to see Cynde McInnis coming. That's because this whale enthusiast brings ultra-cool stuff with her when she arrives at their schools. By combining something fun with something educational, children are captivated and inspired to learn about the oceans and the animals that live in them.

All this education comes in the form of a life-sized wildlife inflatable "whalemobile."

The inflatable represents a real-life humpback whale named Nile who lives in the North Atlantic. Born in 1987, she has had a life filled with both good and bad. As the inflatable company chosen to bring Nile to school kids everywhere, we were careful to portray every aspect with exacting detail. Children can easily make out the entanglement scars on her tail as well as her unique patterns and distinct dorsal and pectoral fins.

But the best part? Going inside the Nile inflatable. There, school kids are able to see ways in which whales are similar to humans.

Just imagine the conversation around the dinner as kids tell about the life-sized whale replica they saw at school! Cynde hopes the fascination and respect for marine animals will last a lifetime. With the impression Nile makes, it probably will.