Bringing Your Inflatable Costume to Life 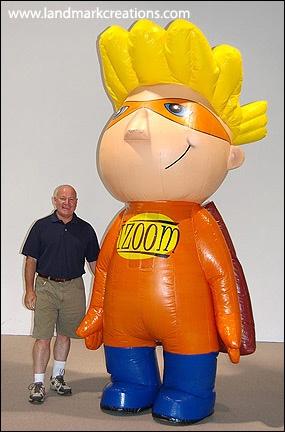 Easy to Use and Comfortable to Wear, Inflatable Costumes Bring Energy and Life to Events

They swing.  They sway.  They walk up and hug you!  Most people are familiar with cold-air inflatables that are tethered to the ground.  Many are also familiar with newer dynamic inflatables that are still tethered, but can flap and wiggle in the wind.  Making their way up on the popularity list are inflatable costumes.  What's the difference?  Inflatable costumes let your character move around freely wherever he wants.

When you say "costume," the first image that comes to mind is most likely an outfit made of cloth.  But inflatable character costumes offer some unique advantages ordinary material can't.  For instance, inflatable costumes are truly unique.  People are used to seeing costumes made of material, but the appearances, shapes, and colors of inflatable costumes stand out in the crowd.

If you've ever worn a traditional costume, you know they can be quite uncomfortable.  Heavy and hot are the two words that most often describe the experience.  Inflatable costumes, however, are equipped with a battery-operated fan system that straps to the waist of the wearer.  This keeps them much cooler than you might expect.

As for the weight, traditional mascot costumes can add as much as 20 pounds to your load.  And that doesn't include the other layers (such as cold packs for the neck and body or special undergarments) that have to be worn as well.  On the other hand, inflatable costumes are made of lightweight vinyl and are filled with air.  It's more like wearing a swimming pool float than a costume.

"Are Inflatable Costumes Difficult to Wear?"

See the process in action when you watch this inflatable costume video.

That's it!  Your inflatable mascot costume is ready to walk, jump, shake hands, give hugs, and fully interact with the crowd.  If you think a photo or tethered inflatable drove on-lookers wild, just wait until they see the living, "breathing" version.  Kids and adults alike will be doing double-takes… and isn't that really what marketing is all about?

How to Set Up & Take Down Truck Bed Parade Floats