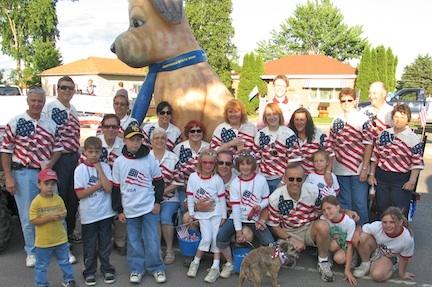 Otis the dog accompanies his owner, the President of Northern State Bank of Virginia, to work every day faithfully. He's become quite a fixture and is considered one of the team. In fact, Otis is so well loved, he's moved into the position of official bank mascot. Because the public loves him so, his presence is often requested at community events.  But for such a small creature, crowds are not always a good thing. Enter Otis the inflatable mascot.

The perfect solution was to create an inflatable Otis that could be used as a parade balloon and in other capacities. Nicknamed "Big O," this inflatable mascot has become almost as popular as the original. Bank representative Jodi Laeupple commented, "The whole town looks forward to seeing the big Otis balloon during parades and local events. Big O really makes a statement!"

Since Landmark inflatables are multipurpose, they can easily be used as parade balloons, outside a storefront during the grand opening, on your rooftop to announce specials and in dozens of other ways. And when they are as cute as Otis, everybody wants to stop and take a look!