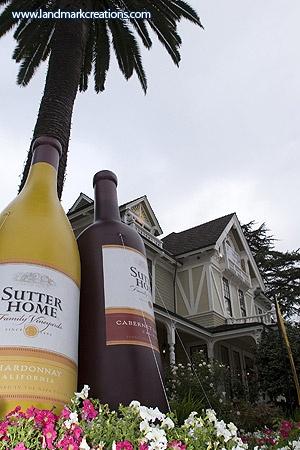 What Do Giant Advertising Inflatables, Hamburgers and Wine Have in Common?

They all played an essential part in enhancing the television coverage of Sutter Home's Build A Better Burger Recipe National Contest and Cook-off. The winery thought this form of creative advertising would work well because, "The event was covered by TV and we wanted a strong logo appearance."

With brand recognition being a primary goal, Sutter Home chose Landmark Creations to develop their 12-foot by three-foot wine bottles in Merlot, Zinfandel, Cabernet Sauvignon and Chardonnay. In striking detail, the bottles were identical to those found on store shelves across the country.

This past May, the giant advertising inflatables were part of the 16th annual event that drew contestants nationwide to compete for a $50,000 grand prize. The winner also received the honor of having their recipe included in future editions of the Build A Better Burger book.

The inflatable bottles provided an excellent photo op for the media as well as offering constant reinforcement. The end result? Sutter Home was pleased to report they did what they set out to do and "achieved a high level of recognition at the event."