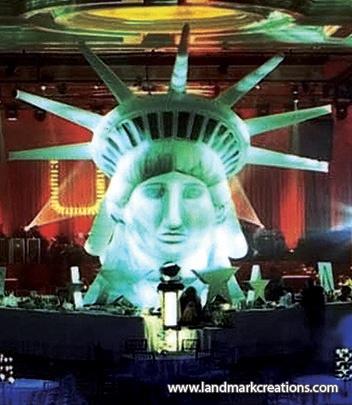 Fandango, a special events coordinator, knew that after 9/11 people, in general, were showing more patriotism. However, people in Washington, DC were particularly prone to flag-waving and the like. That’s where the idea of the Statue of Liberty head inflatable came into play.

Strategically positioned at center stage, this life-like replication was immediately noticed by all who attended AOL’s 2001 holiday party. While the statue inflatable was not directly intended to generate leads, or sales, or even traffic… it did lend itself nicely to a feeling of Americanism and to the branding of AOL as a company that cares.

This inflatable also made its way into the 2003 Event Solutions Fact Book. All those in attendance at the party had positive comments about the statue.