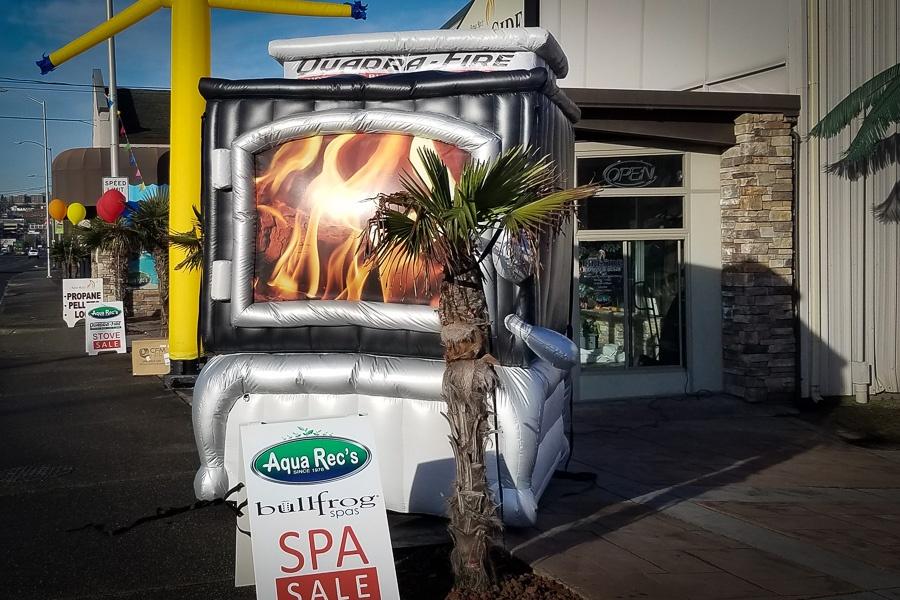 If you own a storefront, watching all those people walk right past your door can be frustrating. What will it take to entice them to come inside? Sure, placing signs out front helps communicate sales messages, but signs can sometimes get lost in the shuffle.

Thinking outside the box, Jamie Rasmussen, Controller of Aqua Rec's Fireside Hearth & Home, decided to add a much more visual element to his sidewalk advertising. A custom 14-foot, cold-air inflatable fireplace was designed with a two-fold purpose.

First, with its detailed graphic flames; the inflatable fireplace caught the eyes of people as they strolled by. Simply getting folks to look up from their cell phones these days is an enormous feat all to itself. Second, the inflatable lent a sense of warmth. No, the flames were not real, but they looked the part. During those frigid Washington State winters, everybody's looking for a little more heat!

Did it work? You bet! During Aqua Rec's Quadrafire Stove President's Day Sale, the store did see an increase in traffic, which contributed to the overall success of the event.

Want to shake up your sidewalk presence? Give us a shout!