Matt Steinbrenner from SteinDesign brought us his vision for a custom inflatable for MTV’s upcoming Video Music Awards.

Their request was for an enormous, realistic replica of VMA’s famous “Moon Person,” the astronaut statuette awarded to VMA winners.

Grateful for the opportunity to partner with SteinDesign, we didn’t want to turn the project down. But could we deliver such a large-scale inflatable in time for the September awards show?

Could Landmark Creations deliver such a large-scale inflatable in time for the September awards show?

We could, and we did. The project was authorized on June 1, and by August 23, the giant inflatable replica was ready to go out the door.

For such a massive creation, this was lightning-fast turnaround. But it wasn’t easy. According to Landmark Creations’ President Stephanie Meacham, it took “all hands on deck and a lot of overtime.”

In fact, the custom inflatable was so huge and complex it couldn’t be test-inflated onsite at Landmark Creations. Instead, five of our team members traveled to New York to install “Moon Person” at the VMA ceremony venue, Brooklyn’s Barclays Center.

The team was devoted to this project. Some worked remotely. Others spent entire days and evenings doing complicated hands-on construction. 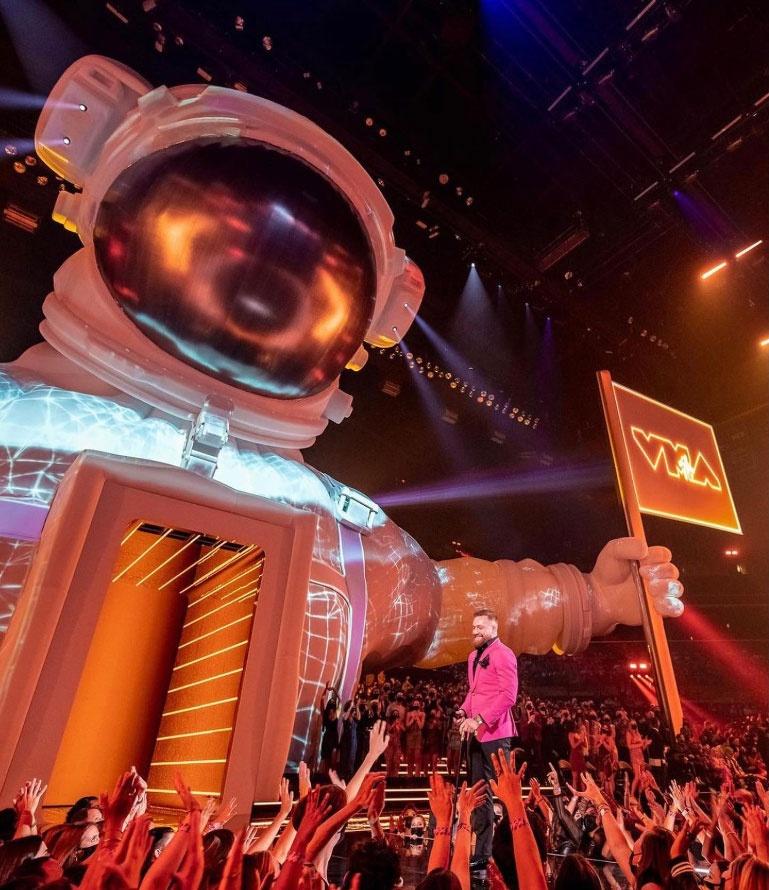 Along the way, we were faced with a few special challenges. To overcome these obstacles, we tested some new techniques which worked so well that we plan to use them for future projects.

In the end, all the hard work paid off. The finished inflatable replica towered 55 feet high and spanned a width of 92 feet. With its glistening silver spacesuit and iconic flag, it precisely matched the VMA statuette, down to the smallest detail.

To top it off, this custom creation incorporated an inflatable tunnel, which served as the passageway to the main stage. Performers emerged from Moon Person’s “torso” to make a show-stopping entrance.

Throughout the ceremony, luminous LED lighting was projected all over Moon Person, creating a magical atmosphere. The effect was stunning.

Landmark Creations’ giant inflatable was a huge hit with the VMA audience. Back at Landmark Creations headquarters, our employees were thrilled at the impressive fruit of their labor standing onstage for all the world to see.

Landmark on Location: Prep is Vital for Event Day Installs

Landmark on Location: Weather & Buzz are Critical for Success