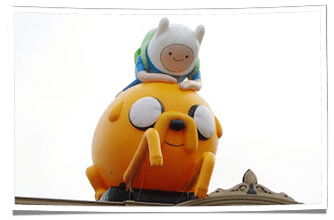 As the temperatures continue to rise, this is peak inflatables season.  Outdoor event marketing as well as festivals, tradeshows and other types of marketing allows for free reign of inflatables. But as you relish the long days of summer, don't forget to plan for upcoming fall activities.

Huddle Up! You have one week left to order football tunnels in time for the 2011-2012 season.  Orders must be in by the first week of August to ensure on-time delivery.

Lastly, if you're feeling a creative block, here are several ways to unleash a new flow of branding ideas for you and/or your clients.

Since 1932, Eastern Propane & Oil has served residents and businesses alike. Now, having grown to over 300 employees, it supplies propane and more to five states in and around the Eastern Seaboard.  The secret to their growth?  It's partly due to their community commitment and savvy marketing skills.

A Dancing Clam on the Rooftop? Balloon Marketing Makes it Happen

What if you have a regionally popular mascot for which you'd love to get more exposure?  And what if this mascot was a dancing clam?  Would your first thought be to put it on your rooftop?  Balloon marketing was exactly what Ivar's Restaurants had in mind when they contacted Landmark Creations.

Event marketers, The Display Company, were charged with creating an interesting centerpiece for the Italian Heritage Festival in Buffalo, NY.  As the largest street festival in the United States, this event would attract thousands of onlookers.  What came to mind?  One of the most well-known Italian landmarks ever: the Leaning Tower of Pisa.

Inflatable Artwork?  Custom Inflatables Are Not Just for Marketing Anymore

Artist Broc Blegen is a staunch George W. Bush supporter. So much so that he wanted to pay homage to the president immediately rather than waiting the typical months or years it normally takes for traditional statues to be created.  Employing his creative nature, he devised a collaborative effort with Landmark Creations to make his vision a reality.

Oh the tales we could tell… and we plan to!  Our travels have brought us quite an education in several areas. Look for upcoming posts, photos and videos of our adventures in the next season of Ask Landmark.

Here are some highlights of each month's escapades.

April - What a challenge! This was a huge install (literally) as we worked with Jean from The Richards Group to set up three 40-foot+ inflatable animals: a turkey, bass and buck. This display was created for Cabela's grand opening in Plano, TX. Using generators and being located on the sides of a busy freeway only added to the thrill.

May - From freeways to rivers, the adventure continued as we moved east to Boston, MA and the campus of MIT.  Working with Nader Tehrani and Gediminas Urbonas, we helped bring their Liquid Archive project to life in order to celebrate the institute's 150th anniversary.  Did I mention the inflatable was completely installed on a barge floating on the Charles River?

Spanning the nation, I headed west to the Event Marketing Summit Chicago where I saw firsthand just how tirelessly experiential marketers work to pull off their campaigns.  This demanding pace requires a true passion for your job and that was demonstrated repeatedly during my visit.  My biggest take away? Marketers need to integrate live events with social media to create an overall unique experience that wins the hearts and minds of their audience.

July - Zipping to the west coast brought inflatable installations to new heights.  Comic-Con 2011 in San Diego found us working with Cartoon Network to set up inflatables of their Adventure Time characters: Jake, Finn and Rainicorn.  This inflatable was truly giant-sized and absolutely enveloped the building's trusses (something we believe has never happened before).  For added exposure, a second inflatable was positioned on the rooftop of Ciro's Pizzeria.  The crawlspace leading to Ciro's roof was so small we had to recruit the help of a crane to lift the inflatable into place. A wild ride for sure!  Check out the pictures on our Facebook page.

Let's talk!  Need help coming up with creative ideas for inflatable promotions?  We love a challenge. Contact us today and let's arrange a time to do a little brainstorming. As your inflatable partner, we have a vested interest in your success!