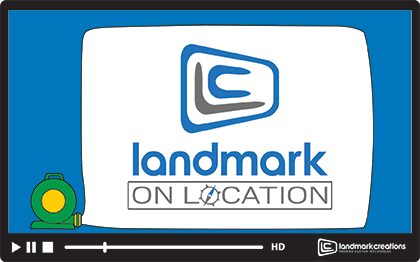 2014 came in with a bang and Landmark Creations is buzzing with excitement. We have a new video series for you called “Landmark on Location.” Once a month we’ll take you behind the scenes of inflatable installations and projects to show you what went right, what went not-so-right and some valuable lessons you can apply to your own event marketing. (The first video is available now.)

In addition, we have 10 new case studies that will give your creativity a nudge. And speaking of nudging, don’t forget event planning season is now running full steam so plan ahead when ordering your inflatables.  Happy New Year and let’s get to it!

Pop Quiz: When do people buy tires? Answer? Whenever they need them. There is no tire season or scheduled time to buy as there is with Christmas gifts or weekly groceries. Because there is no way to predict when drivers will need new tires, you have to market your business continually.

As an inflatables manufacturer founded in 1986, we’ve created our fair share of sports tunnels. The typical scenario is that the administration, sports staff or booster club of a high school or college will contact us and place an order. However, there is the rare occasion where someone outside the school system steps up to help out.

When it comes to races, where are the number one and number two spots for photo opportunities? The start line and finish line without question. If you plan to take advantage of the free exposure social media and the Internet offer, shouldn’t your start/finish line look awesome and be fully branded? We think so and Paul Shockley, Recreation Program Manager for Kiawah Island Golf Resort, agrees.

What do you get when you cross an inflatable archway and a sports tunnel? An impressive-looking creation that gives you twice the usage of either one alone. Broken Arrow High School discovered this unique hybrid inflatable when they ordered their black and gold sports tunnel with a detachable arch/wall.

School spirit runs wild at Broken Arrow High School even before fans enter the stadium. That’s because the Tigers use an inflatable dual archway branded with their school logo. Marketing the tailgate area during football season and directing attendees to the entrance of school-sponsored events are just two of the many uses Broken Arrow High has found for its arch.

When it comes to the election of political officials, the landscape can quickly get cluttered. Everywhere you look, the horizon is filled with lawn signs, banners and little, branded balloons for the kids. However, New Jersey Councilman Keith Loughlin discovered that taking to the sky gives a distinct advantage when trying to get your name out to the masses.

Turning a Mascot into an Inflatable Billboard Increases Visibility

When the weather is nice and the sun is shining, visitors to the Mile High Flea Market in Denver, Colorado, are greeted by Freddy the Flea. This inflatable mascot (turned billboard) stands 30-feet tall and definitely does his job at creating awareness and driving traffic to the 80-acre marketplace.

The team at Landmark Creations consists of several U of MN alumni, so we hold a special place in our hearts when it comes to one particular gopher. In 2002 we had the honor of developing the first Goldy the Gopher inflatable mascot. Eleven years later, version 2.0 has been released with pride.