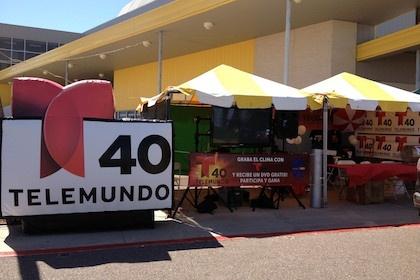 KTLM Telemundo 40 Had the "Best-Looking Booth," Thanks to an Inflatable Logo

During the process of rebranding the Telemundo Network, Laura Repreza, Marketing and Promotions Director, needed something to help with the TV station promotions she had planned.

Among other criteria, Laura needed something that would capture the attention of event goers who were being inundated by a boatload of other sights and sounds. This marketing tool should be easy to transport, set up and take down. But, most of all, it had to represent the TV station well.

Enter Landmark Creations with a custom-designed inflatable logo that was just the ticket. "[The logo] helped us create a better presence, improved foot traffic, became a photo backdrop and helped us have the best-looking booth at the events," explains Laura.

And quite a list of events, it was! The new inflatable logo has been seen at Borderfest (an outdoor, four-day festival), livestock shows and rodeos, career days and job fairs, Telemundo 40 back-to-school remote broadcasts, business expos, outdoor concerts and more.

Laura chose Landmark over all those other guys for three reasons: (1) our "no problem!" attitude, (2) our experience in working with other TV stations and (3) the lightning speed at which her calls were returned.