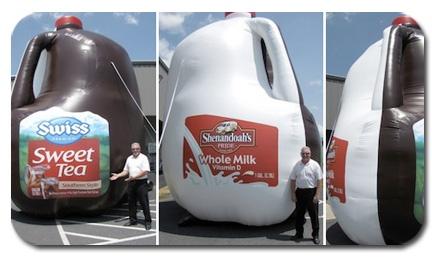 Here's a clever idea: a double-sided product replica inflatable. Because Shenandoah's Pride Dairy (owned by Dean Foods) is usually in a position to promote two products at the events they attend, someone came up with the ingenious concept of two-sided custom inflatables.

One side of this gallon-jug-shaped inflatable was a replica of their Swiss Sweet Tea brand while the opposite side depicted Shenandoah's Pride milk. In the two months since Dean Foods' inflatable hit the road, it has made stops at Food Lion and Martins grocery store grand openings as well as a golf tournament.

Key Accounts Representative, Corri Loan, was proud to report, "We received multiple plugs on the local ESPN radio broadcast because the inflatable was set up right beside their table at the golf tournament. The announcers were fascinated by it. At the store opening, we handed out coupons for the Swiss tea while standing in front of the inflatable. Kids and adults alike LOVE the inflatable.  It is definitely eye-catching and people wanted to know more about it. Thanks for the fabulous product!"

"I was especially impressed with your ability to turn around such excellent work on very short notice, and at a fair price."