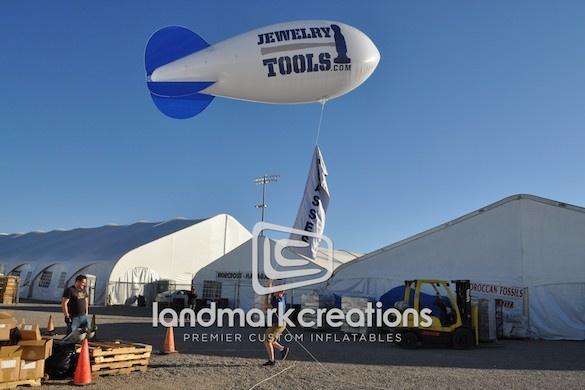 Mark Ryan and Alec Day of JewelryTools.com had a problem. They were headed for the largest gem show in the United States, the Tucson Gem and Mineral Show, and needed a way for customers to find their tent in a sea of similar displays.

"At a show like that there are often people looking specifically for jewelry-making tools; we wanted to make it obvious to them where to find what they were looking for," Mark said. Beyond letting people know where to find the Jewelry Tools display, they also needed a way to draw more foot traffic. "We wanted to catch the eye of customers miles away, and people just around the corner."

Mark got more than he hoped for. Not only were visitors able to quickly spot the Jewelry Tools tent, but many others stopped by just because of the giant inflatable blimp hovering in the sky. And giving directions? Super easy when you can simply say‚ "Look for the blimp."

The decision to order a helium blimp wasn't so easy, though. Mark and Alec were concerned about their ability to manage it on their own, but they were pleasantly surprised. "It was easy enough for two people to handle and maneuver each day when we launched it, and each night when we brought it in."

Great customer service and quick turnaround convinced Mark and Alec that Landmark could help solve their problem‚ and we did!

"[The logo] helped us create a better presence, improved foot traffic, became a photo backdrop and helped us have the best-looking booth at the events,"