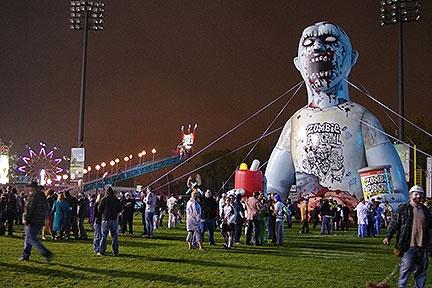 Let Your Inner Zombie Out with an Inflatable Mascot

Saying that the Zombie Pub Crawl is the time of your life is a bit of an oxymoron. Zombies, after all, are dead. Nonetheless, for one night a year residents and visitors from far and wide are invited to let their inner zombies run free in the streets of Minneapolis for an evening of semi-civilized mayhem.

Yes, it's all in the name of fun… and setting world records. Currently, this all-out zombie raid retains the title of Largest Gathering of Zombies in the Guinness World Records.

At the center of it all is Phil: a 50-foot tall inflatable mascot that is the namesake of the city liquor inspector who had a role in getting the Pub Crawl approved by officials. (There's a unique legacy for ya!)

As an inflatable manufacturer with high quality standards, we pulled out all the stops to incorporate every detail that makes for a good zombie. (Surprised that we knew about such things?) Distant eyes… a face covered in blood and gore… and guts hanging out for all to see top the list of instant zombie identifiers. Top that off with a wardrobe consisting of an official Zombie Pub Crawl T-shirt and a cold one for each hand, and Phil became the poster child (literally) for zombies everywhere.

And the public response? You can well imagine that people took notice, including Minneapolis Mayor R.T. Rybak who tweeted a picture of Phil to all of his followers. Now that's publicity you couldn't buy for all the money in the world!