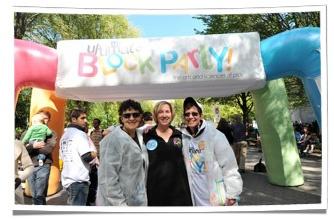 What do search engine giant, Google, and toy-maker, Hasbro, have in common?  They both encourage their employees to play… on the clock.

They've learned from experience that one of the best ways to generate a creative and innovative atmosphere is to allow employees to pursue the activities that lead toward this type of thinking.  A.k.a. play.

The Ultimate Block Party understands this concept as well. That's why they've promoted a groundbreaking concept. According to an organization-issued press release, during the "first 'play date' in this national education movement, the Ultimate Block Party transformed the Bandshell area of New York City’s Central Park into the world’s most innovative playground on October 3, 2010, demonstrating the power of fun and games for learning and helping to reinforce that how we play as children helps form who we become as adults."

The balloon arch Landmark Creations was commissioned to build was used to bring attention to the event. It also served as a traffic cop of sorts. With over 50,000 people in attendance, it was important to have a sense of order. The inflatable archway anchored the space within Central Park while also contributing to overall organization by making an entrance/exit for visitors to use. We're proud to be part of such a unique undertaking!