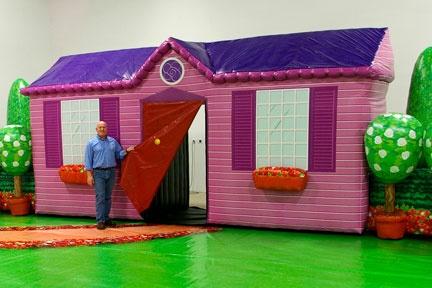 An enormously diverse character, Dorothy the Dinosaur is a rare "rososaurus" that is uncommon in most regions of the world. However, she can currently be seen performing with The Wiggles onstage and in their DVDs and television shows.

This "yellow-spotted green dinosaur with surprisingly scary teeth" is actually very friendly and kind. She lives in a purple and pink house which Landmark Creations had the extreme pleasure of recreating as an inflatable balloon for her world tour.

While onstage with The Wiggles, Dorothy takes part in her usual pursuits of eating roses, tending her rose garden and dancing ballet as her very own Rosy Orchestra plays. Her character interacts with the inflatable house that is used as an onstage set. Look for the tour locations and dates (now in Canada) and take the kids for a wonderful make-believe adventure.

"We have used Landmark in the past for other projects," states The Wiggles’ USA representative Mark Curtis. And each project we do for The Wiggles is a blast! Who wouldn't love bringing imaginary characters to life via the magic of inflatables?