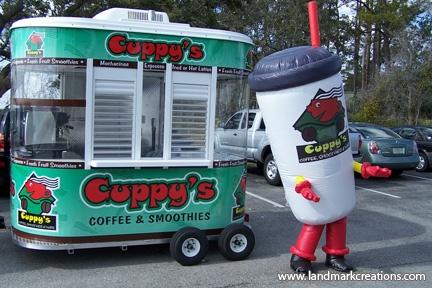 While their great coffee drinks and smoothies keep customers coming back several times each week, this coffee chain was looking for some support with increasing foot traffic to their stores, kiosks and carts. Cuppy's wanted something that would quickly gain attention and draw crowds of people.  An inflatable costume did the trick because it offered a way to engage and interact with customers.  Eye-catching and fun, this form of inflatable advertising is specifically geared toward increasing sales.  Indeed, that was Cuppy's objective when they ordered their inflatable costume from Landmark Creations.  And it performed just as expected!

Experiencing increased sales whenever the inflatable costume is in use has helped Cuppy's achieve greater growth. Franchisees appreciate the dependability inflatables offer because they know when they flip that inflatable advertising switch the sales will come rolling in!