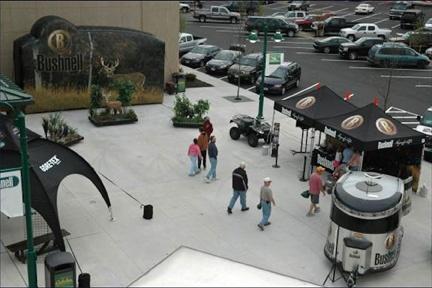 Bushnell Racks Up with Camo Mattress at Mobile Marketing Events

When Bushnell decided to take a stand as the world leader in outdoor technologies, it set out on the road during a massive nationwide mobile marketing campaign.

For months on end, Michael Waddell, host of the TV show Real Road Trips, has zigzagged across the country making stops at popular retailers such as Cabela's, Bass Pro Shops and others.

Where do inflatables come in? Landmark set the stage with a custom-designed camo, cold-air, inflatable mattress.

The Bushnell setup mimicked the great outdoors with plastic wildlife and fake bushes and trees against an inflatable, branded, camo wall. Crowds have loved it at every stop so far, and have flocked to sign up for the many cool prizes Bushnell and its sponsors are giving away.