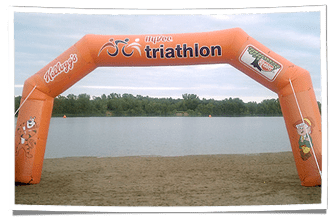 Employee-owned Hy-Vee grocery stores have 229 locations - and a big heart. CEO Ric Jurgens founded the Hy-Vee Triathlon in 2007 to promote fitness and encourage a healthy lifestyle. But there was more.  Jurgens also wanted to help children. So he set up the triathlon to donate proceeds to Variety - the children's charity in Iowa.

We were thrilled to play a small part in helping this organization raise over $750,000 (to date) for their charity and to persuade others to live healthy. By having an inflatable archway created for the race, Hy-Vee was able to promote their sponsors through the use of interchangeable banners. In addition, the professionally designed and manufactured arch also made a great impression when the event received television coverage on NBC.

According to Darin Hirl, Director of Event Marketing, "The Hy-Vee Triathlon has grown in four years to the richest event in the sport. Elite athletes from around the world come to West Des Moines in pursuit of $1 million in prize money."

Way to go, Hy-Vee! Keep up the good work.

"We had the inflatable hockey player out in front of the coliseum and it caused such a crowd! Thanks for the professional job you and your company did for me!"