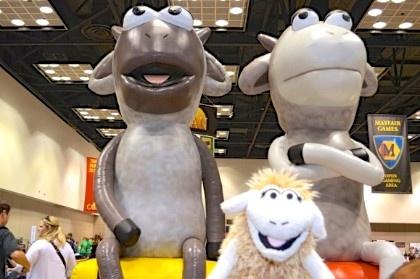 If you've ever been to YouTube to watch the Mayfair Games channel, you know exactly who Bob and Angus are. These two feisty sheep are constantly at each other in an Odd Couple sort of way.

Mayfair Games wanted to bring the magic of YouTube to the events they attended, so the inflatable characters - Bob and Angus - were born.

"We have [the inflatable mascots] scheduled to attend Chi Tag in Chicago in November, and they are guests of honor at a distributor open house in Fort Wayne.  You’ll be able to see them in the Grand Wayne Center. The characters upon which these two inflatables are based are from a weekly YouTube puppet show, which is always funny, sometimes odd, but never really serious," explains Bob Carty, Vice President of Sales and Marketing.

Bob and Angus drew attention from both the press and onlookers at their first public appearance, which included more than 1,000 photos. At that same event, Mayfair Games set a new Guinness World Record for "Most people playing Settlers of Catan simultaneously."

Lots of fun, tons of attention and excellent branding. That's the way we roll.